Everybody, who knows him, becomes addicted to his charm!

Dollar d’Or SB was licensed at the Southern German Stallion days in January 2011 in Munich. His elasticity and his free jumping as well as his coolness and overview in every single situation have convinced us from the first moment, we have seen this stallion. After the licensing Dollar d’Or SB started breeding and after the first season he did his 30-day stallion test in Munich. He became the overall winner of the test and gained the best result of all Holsteiner stallions in Germany in that year. He received very high scores for his canter, character and jumping. His rideability was even rated with a 10 (excellent)! Remarkable is his positive breeding value compared to his relatives after the test. In the category jumping his breeding value was 12 points higher than the one of his relatives; in dressage even 25 points higher compared to his relatives. That shows the high quality of this stallion and indicates the potential for breeding with Dollar d’Or SB.

Dollar d’Or SB shines with his huge uphill canter, excellent rideability, much basic elasticity and his intelligence at the jump. As a four year old he was repeatedly placed in young horse classes and met all our expectations. As a five year old he began a very promising season in which he won young horse classes with scores up to 8.6. He also took part in his first international show, where he was placed in all three classes of the Youngster Tour.

In August 2013 a fire break out at the stud, where Dollar d’Or SB was for breeding. Many horses died. Though Dollar d’Or SB survived like in a miracle. He suffered very badly from a smoke poisoning that he has survived only because of his strong will to live. Accordingly to these facts, it was not possible to ride or even to bring him to a show in 2013 anymore. Since spring 2014 he has been ridden again. However, the training has showed that Dollar d’Or SB is still suffering from physical and mental consequences from the fire. Therefore we have decided to put him back at stud. Our ethical understanding and our sense of responsibility and respect for the horse tells us, that it won’t be fair for Dollar d’Or SB to push him to compete with this happenings in sport.

We believe that this horse because of his character, excellent rideability and his canter and jumping ability has everything a top jumper needs and therefore we are very excited of his offsprings. This abilities he also has proven in the 70 days stallion test in Schlieckau, where he became overall third best stallion and high marks for his character (9,25), Canter (8,0), Jumping (8,21) and eventing (8,5).

Dollar d’Or SB is registered in the HB I and approved für Deutsches Sportpferd (DSP) as well as for Oldenburg-International.

Dollar d’Or SB is a direct son of the Individual Silver and Team Gold medal winner at the World Equestrian Games in Jerez 2002, Dollar du Murier. He won already at the age of eight the World Cup in Paris. In the following years Dollar du Murier was successful in the Grand Prixs of London Olympia, Paris and Geneva. He finished his career with the title Champion of France in 2004. Dollar du Murier combines the world-famous french stallions Jalisco B, Uriel and Ibrahim in his pedigree and is still one of the best French sires. Although he was rarely used in breeding, many offsprings were successfully in international show jumping. For example his daughter Castle Forbes Myrtille Palouis was the most successful show jumper in the world in 2013. Furthermore she was the only horse in all rounds of the European Championships in Herning, who did not make a single fault. She won in a sensational manner the Individual Gold medal at the European Championships 2013. In addition Dollar du Murier sired the seventh in the individual competition of the European Championships 2007 in Mannheim, Ionesca de Brekka.  Also Ideal de la Loge, who won the Nation Cup in Aachen 2009 as well as the Global Champions Tour Final 2011 and big classes at the shows in Calgary, Münster, La Baule, Lyon and Helsinki, is a son of Dollar du Murier.

Dollar d’Or SB’s dam, Nitid, is also the mother of two mares, who are successful with amateurs in classes up to 1,40m. His dam’s sire Lascadell was a stallion at the Holsteiner stallion stable. Especially as a dam’s sire he was remarkable, but he also produced some very successful offsprings in dressage and show jumping up to advanced level.

Particularly interesting in Dollar d’Or SB’s breeding is his grandmother, Idina, who was successful in the international sport with the different members of the Weinberg family from Aachen. She was successful until the 1,50m level. Her mother, Esprit had produced in total five successful offsprings in dressage and show jumping.

From Dollar d’Or SB’s motherline emerged many sport horses, that were successful with amateurs and professionals up to the advanced level. Especially interesting in Dollar d’Or SB breeding is the high amount of thoroughbred. His pedigree includes the famous thoroughbred stallions: Furioso xx, Ladykiller xx and Sacramento Song xx.

Dollar d’Or SB has been well received by the breeders during his time at stud from 2011-2013 and impressed with his first offsprings. In the first year he was able to make 90% gold premium foals and his daughter Dollar Girl (Dam’s Sire: Asti Spumante) was one of the most expensive foals at the Foal Auction in Gera in 2012.

Also his second year of offsprings was able to convince: there were almost exclusively gold premium foals and Dollar d’Or SB sired two foal champions at the regional foal selection of the bavarian studbook in Postmünster. His daughter Dollar’s Prinzess (Dam’s Sire: Question d’Honneur) was sold as one of the most expensive foals to England at the auction “Shooting Stars” in Viernheim 2013 and his daughter De l’orange (Dam’s Sire: Asti Spumante) was sold at the foal auction in Biblis in 2013 to a well-known show jumping stable in Southern Germany.

In 2015, his first offsprings will turn three years old. A first son of Dollar d’Or SB (Dam’s Sire: Ludwig von Bayern) was presented at the pre-selection for the South German Stallion Days in November 2014 in Munich-Riem. His smart and careful free jumping generated great interest from different sport riders. Dollar d’Or SB seems to give on to his offsprings a very friendly character, a good rideability and canter, a lot of elasticity and quality over the jump. The offsprings we have seen while free-jumping have a very good overview, jump with a good balance and carefulness and seem to have the today required “spirit” for jumping and a natural affinity to jump.

Dollar d’Or SB gives on good elasticity and movements, why already several dressage riders have acquired foals of him. We see him as an ideal partner for modern sport mares. He gives on his very good canter, balance, intelligence, quality and joy for jumping. Due to the fact he is a Holsteiner stallion with almost no C-blood, especially the combination with mares that have the Holsteiner C-blood suited very well with him. However, also the crossings with mares with other Holsteiner, French and Dutch bloodlines have resulted in very athletic foals of Dollar d’Or SB.

All of Dollar d’Or SB’s offspring have his very high ridebaility and have the french note (high willingness to jump, very good quality over jumps and good character).

See below some of his offsprings from very different motherlines: 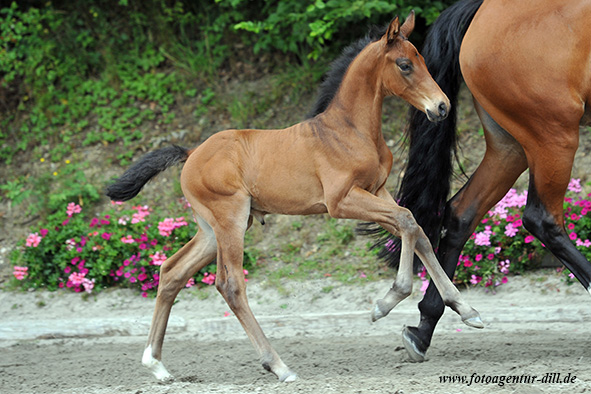 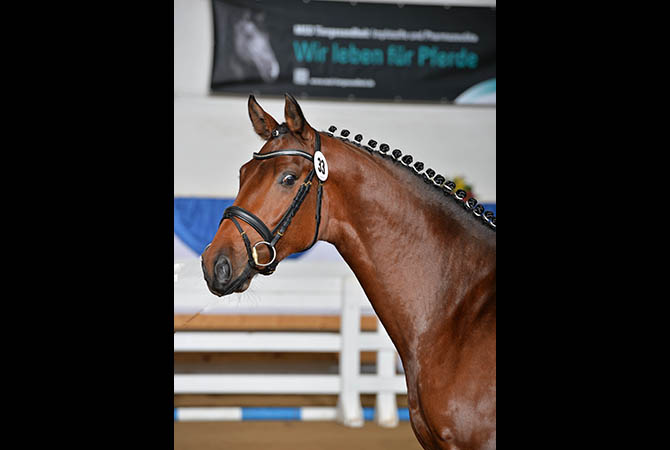 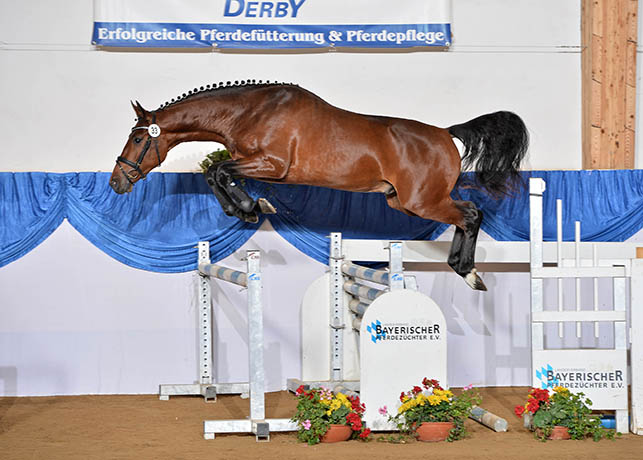 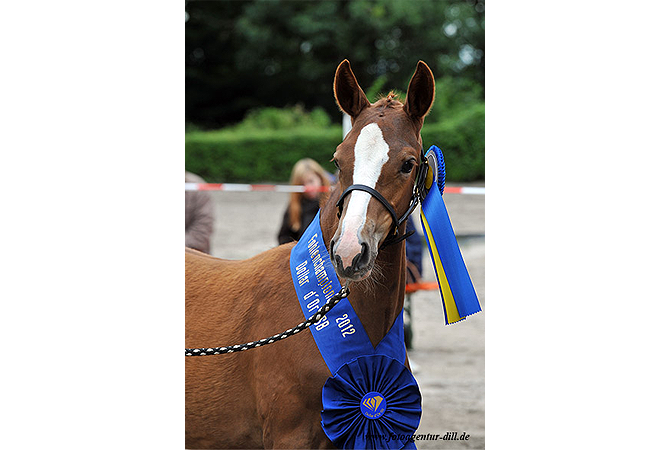 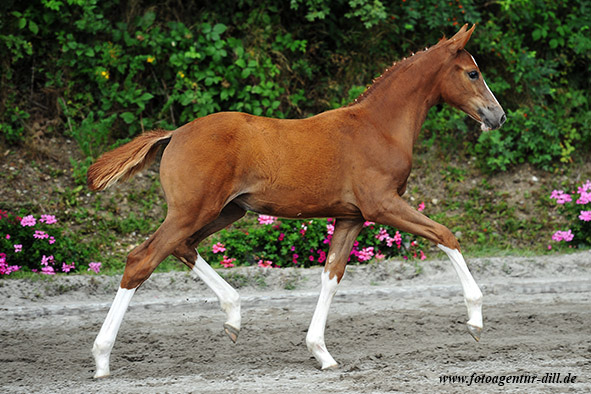 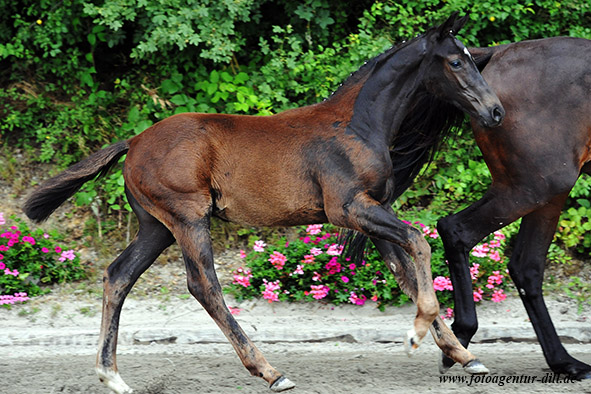 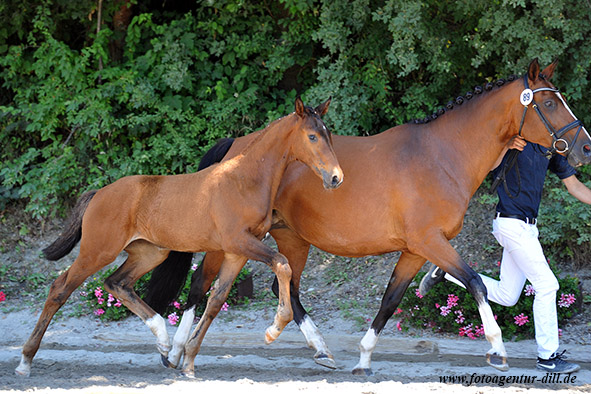 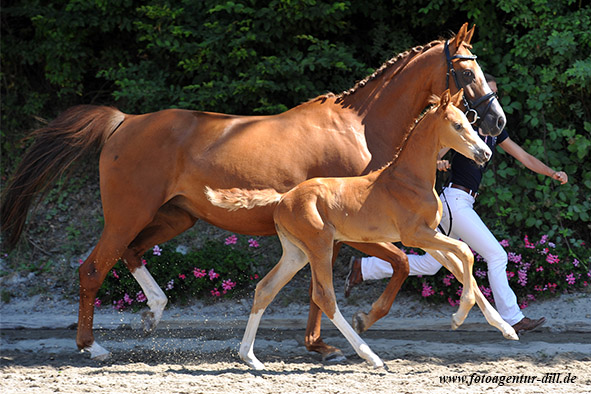